Born in 1929
Mother of Basque Immigrants to Bakersfield

Mayie Etchebarne Maitia was born on May 8, 1929 in St. Etienne de Baigorry, France. She is the seventh of nine children of a closely knit family. When Mayie was very young, her mother passed away and, as was the Basque custom, her grandmother took over the responsibility of raising the family.

It was in this environment that Mayie’s character developed. Her religion taught her the importance of caring for others, how to give and how to share. In 1947, when she was 18 years old, Mayie along with some of her brothers and sisters, emigrated to the United States. She worked for Frank and Marie Amestoy, Noriega Hotel and Pyrenees Cafe. Her experience prepared her well for the future.

Mayie met J.B. Maitia, a bartender, and married him in 1947. They had two children, Jenny and Daniel. In 1954, when Mayie was only 25 years old she and J.B. opened their own restaurant, the Wool Growers Cafe on Sumner Street. They relocated to the present location in 1975 and expanded the banquet facility in 1981.

Although Mayie worked long hours at the restaurant and cared for two children, she always found time to help Basque immigrants. She had learned the new language and the new ways of dealing with bureaucracy. She helped the new arrivals to face intimidating situations by actually taking to them to such places as: the consulate for legal papers, the Dept. of Motor Vehicles for licensing, travel arrangements, doctors, and dentists and all the challenging experiences that newly arrived Basques had to meet. In addition, she employed many Basques at her restaurant. Thus, Mayie became known as the mother or big sister to so many.

Mayie has been an inspiration and role model. She has contributed generously to the well-being of the Basques community and received a lifetime achievement award. 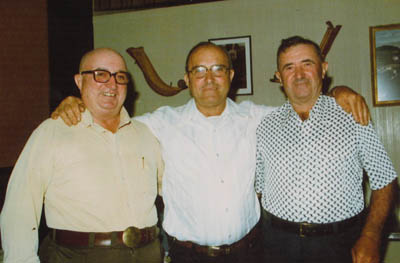 Maitia, Mayie: She was born in Baigorri, Baxe Nafarroa in 1929 in a family of nine children (she was the seventh). Her maiden name is Etchebar. Mayie went to school until she obtained the Brevet des Collèges. Mayie’s father had been to the United States and he often talked about his stay there. Mayie’s older sister (ten years older than her) had decided to go to the United States and Mayie also was eager to go there. She convinced her father to let her go. She arrived in the United States in March 1947, at the age of seventeen. With her sister, they joined their aunt, Mrs. Chevalier, in Bakersfield (their sponsor to come to the United States). Mayie stayed a few days at her aunt’s, until she started working in a Basque hotel, the Amestoy hotel kept by Franck and Marie Maitia. She also worked at the Noriega Hotel until she and her husband started their own restaurant, the Woolgrowers in 1954. They first rented the Metropole building, and they bought a place twenty two years later (the current location of Wool Growers). Mayie’s husband, Jean Baptiste Maitia (Franck Maitia’s brother) worked at the Pyrenees Hotel when she arrived to the US and they got married in November of 1947. They together had two children, Jenny and Daniel. Mayie’s sister married an Ansolabehere (a sheep man from Bakersfield) and they eventually settled in Texas.